Welcome to our tenth “Wednesday Workshop” where we breakdown the key characteristics of a city with natural charm. This week we are taking a trip to a place called New Urbanism. I know you’re already asking, what is New Urbanism? New Urbanism, which started in the 1980s, promotes environmentally friendly habitats by creating walkable neighborhoods with a diversity of housing and job types. This practice was very common before the rise of the automobile, prior to World War II. How ironic that decades later we’re seeing urbanistic charm in new communities all over America, including the City of Groveland. The heartbeat of New Urbanism encompasses 10 major principles, however, we will only be discussing one of those principles called “Traditional Neighborhood”.

To examine the principles and concepts of a Traditional Neighborhood, it is very important to start with understanding Urban Sprawl. Urban Sprawl is the expansion of human population away from central urban areas into low density areas. This is accomplished by creating a separation of uses that includes housing subdivisions, shopping centers, office parks, civic institutions, and roadways. This separation of uses has resulted in social and environmental consequences to communities such as air pollution, increased water consumption, and a lack of preserved green spaces just to name a few. So what is to blame for this urban sprawl across America and some parts of the world? The invention of the automobile.

There are six (6) fundamental rules for Traditional Neighborhood Development that distinguishes it from Urban Sprawl. 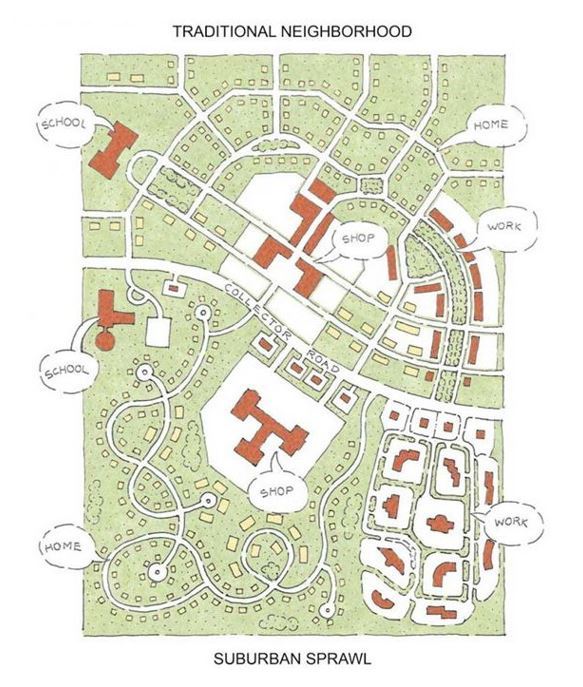 As the City of Groveland moves into a new era of New Urbanism, let’s remember that we’re bringing old planning philosophies up to date. By doing this, our generation as well as future generations will be able to live in a place where life is more sustainable because it’s healthier, re-energizes communities, provides more efficient tax dollars, and makes streets safer for pedestrians while using less energy and creating a more beautiful and cleaner environment.

The Congress for the New Urbanism is hosting its 28th annual national conference online beginning today, June 10th through Saturday, June 13th. For more information on CNU 28.A Virtual Gathering or to sign up for a session please visit https://www.cnu.org/cnu28. The conference was originally intended to take place in Minneapolis-St. Paul this week.

Remember to check back in next Wednesday as we continue unveiling elements of the all-new Community Development Code.