1 average based on 1 vote 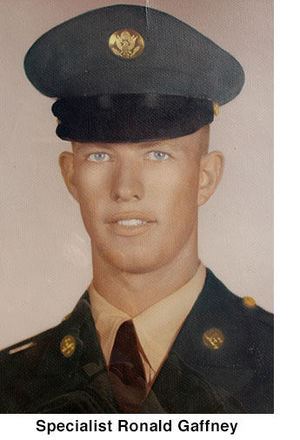 Specialist Ronald Sefton Gaffney was born on April 6, 1943, graduated from Groveland High School in 1961, and died in the Vietnam War on February 19, 1965 at the young age of 21. He was well respected by his peers, teachers and community; and loved eternally by his close friends and family.

Ronald Sefton Gaffney was a United States Army Special Forces Combat Engineer Specialist 5 at the time of his death; serving more than three years; and was attached to Unit DET B-123, 1st Special Forces Group, US Army Support Command Vietnam, MACV. He was serving in the role of an advisor to the South Vietnamese Army. He died immediately from small arms gun fire while rescuing two wounded Vietnamese soldiers in the Phu Yen Province of South Vietnam.

Specialist Ronald Sefton Gaffney gave his young life in the service of his country, selflessly trying to save the lives of two foreign soldiers and sadly becoming the only Groveland, Florida casualty of the Vietnam War.